Messing with the Enemy: Surviving in a Social Media World of Hackers, Terrorists, Russians, and Fake News (Hardcover) 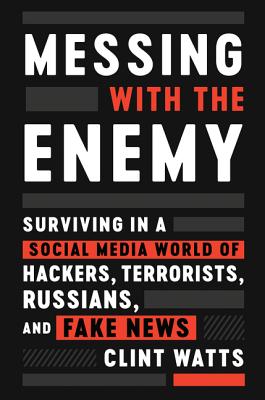 Messing with the Enemy: Surviving in a Social Media World of Hackers, Terrorists, Russians, and Fake News (Hardcover)

A former FBI Special Agent, U.S. Army officer and leading cyber-security expert offers a devastating and essential look at the misinformation campaigns, fake news, and electronic espionage operations that have become the cutting edge of modern warfare—and how we can protect ourselves and our country against them.

Clint Watts electrified the nation when he testified in front of the Senate Select Committee on Intelligence regarding Russian interference in the 2016 election. In Messing with the Enemy, the counterterrorism, cybersecurity and homeland security expert introduces us to a frightening world in which terrorists and cyber criminals don’t hack your computer, they hack your mind. Watts reveals how these malefactors use your social media information and that of your family, friends and colleagues to map your social networks, identify your vulnerabilities, master your fears and harness your preferences.

Thanks to the schemes engineered by social media manipulators using you and your information, business executives have coughed up millions in fraudulent wire transfers, seemingly good kids have joined the Islamic State, and staunch anti-communist Reagan Republicans have cheered the Russian government’s hacking of a Democratic presidential candidate’s e-mails. Watts knows how they do it because he’s mirrored their methods to understand their intentions, combat their actions, and coopt their efforts.

Watts examines a range of social media platforms—from the first Internet forums to the current titans of Facebook, Twitter and LinkedIn—and nefarious actors—from al Qaeda to the Islamic State to the Russian social media troll farm—to illuminate exactly how they use Western social media for their nefarious purposes. He explains how he’s learned, through his successes and his failures, to engage with hackers, terrorists, and even the Russians—and how these interactions have generated methods for fighting back against those that seek to harm people on the Internet. He concludes with a snapshot of how advances in artificial intelligence will make future influence even more effective and dangerous to social media users and democratic governments worldwide. Shocking, funny, and eye-opening, Messing with the Enemy is a deeply urgent guide for living safe and smart in a super-connected world.

Clint Watts is a Robert A. Fox Fellow in the Foreign Policy Research Institute’s Program on the Middle East as well as a Senior Fellow at the Center For Cyber and Homeland Securityat The George Washington University.

“[A] pointed treatise.... [Messing With the Enemy is] a solid, highly useful owner’s manual for a leaky internet—and a damaged democracy.” — Stephanie Garber, New York Times bestselling author of Caraval and Legendary