Confirmation Bias: Inside Washington's War Over the Supreme Court, from Scalia's Death to Justice Kavanaugh (Paperback) 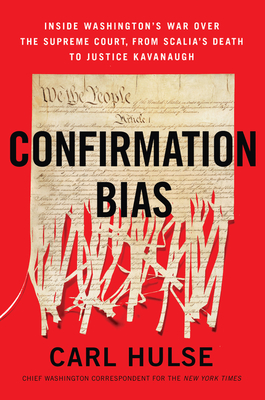 Confirmation Bias: Inside Washington's War Over the Supreme Court, from Scalia's Death to Justice Kavanaugh (Paperback)

From the chief Washington correspondent for the New York Times, a richly detailed, news-breaking look at the unprecedented political fight over Antonin Scalia’s Supreme Court vacancy and the seemingly irreversible dysfunction it triggered across all three branches in the nation’s capital, ultimately delivering us Trump, Gorsuch, and Kavanaugh--updated with a new preface.

The embodiment of American conservative thought and jurisprudence, Antonin Scalia cast an expansive shadow over the Supreme Court for three decades. His death at a Texas hunting resort in February 2016 created a dilemma for Republican leadership faced with the prospect of yet another Obama Supreme Court nominee, this time one who could tip the ideological balance of the court and alter the course of American history.

In Confirmation Bias, Carl Hulse tells an exclusive account of the rush of events following Scalia’s death, including Mitch McConnell’s extraordinary snap decision to deny President Obama’s nominee so much as a hearing, let alone a vote. The author recounts the unsuccessful Democratic effort to break the Republican blockade on behalf of Merrick Garland, a failure that allowed Donald Trump to exploit the vacancy to entice evangelicals and other leery Republicans to rally support and deliver him the presidency.

Newly empowered, Trump and his White House counsel Donald F. McGahn II moved quickly to install Neil Gorsuch on the court. The plan from the start was to have a second judge with a Republican pedigree—Brett Kavanaugh—join Gorsuch at the first opportunity in order to cement a majority conservative bloc. Aided by McConnell and the willingness of Republicans to bend Senate practices, the new administration set out to remake not only the Supreme Court, but the lower courts as well, further roiling the Senate and threatening public confidence in the federal judiciary.

With unrivaled access to figures on both sides of the aisle, Hulse revisits the judicial wars of the past twenty years to show how those conflicts have led to our current polarization and resulted in not one but two Trump-nominated conservative justices who could be serving for decades. Confirmation Bias is a prodigious look inside the bitter judicial politics that have torn apart the Senate and transformed the modern Supreme Court from an institution that is supposed to rise above partisanship into one that is increasingly an extension of it.

History will show, argues Hulse, that Scalia’s death and the ugly battles fought in its wake represent an inflection point in American politics, changing the trajectory of three vital arms of our government—the Senate, the presidency, and the Supreme Court—in ways McConnell could not have envisioned that night in 2016.
Carl Hulse is chief Washington correspondent for the New York Times and a veteran of more than three decades of reporting in the capital. He has also served as the Washington editor of The Times as well as the chief congressional correspondent. Carl is a native of Illinois and a graduate of Illinois State University.

“Entertaining and shrewd....Hulse is an expert guide through the machinations on Capitol Hill.”   — New York Times Book Review

“Carl Hulse has produced an engrossing take on America’s judicial wars…essential reading…[Hulse] fills his book with interviews and history, which people readily share…Confirmation Bias…gets the story right, however disconcerting it may be.” — The Guardian

“A gripping tale of insider Washington with implications far beyond the capital and far beyond our own time.” — Boston Globe

“The book is an absorbing, if dispiriting, look at the maneuverings of inside players like McConnell and Donald McGahn, Trump’s first White House counsel, and outside advocates like Leonard Leo of the Federalist Society, who appears to have steered judicial selection as much as anyone at the White House. Hulse, a New York Times correspondent, probes moments of escalation over the years and the backroom machinations of the Trump strategy now transforming the courts and the law. Inevitably, he covers previously reported ground, but Confirmation Bias is an important guide at this crucial time for the stature of America’s judiciary.” — Washington Post

“The book sheds light on the events of the past two years.” — San Francisco Chronicle