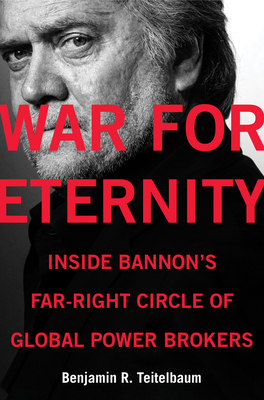 One of Financial Times' Summer Books of 2020

An explosive and unprecedented inside look at Steve Bannon's entourage of global powerbrokers and the hidden alliances shaping today's geopolitical upheaval.

In 2015, Bloomberg News named Steve Bannon “the most dangerous political operative in America.” Since then, he has grown exponentially more powerful—and not only in the United States. In this groundbreaking and urgent account, award-winning scholar of the radical right Benjamin Teitelbaum takes readers behind-the-scenes of Bannon's global campaign against modernity.

Inspired by a radical twentieth-century ideology called Traditionalism, Bannon and a small group of right-wing powerbrokers are planning new political mobilizations on a global scale—discussed and debated in secret meetings organized by Bannon in hotel suites and private apartments in DC, Europe and South America. Their goal? To upend the world order and reorganize geopolitics on the basis of archaic values rather than modern ideals of democracy, freedom, social progress, and human rights. Their strenuous efforts are already producing results, from the fortification of borders throughout the world and the targeting of immigrants, to the undermining of the European Union and United States governments, and the expansion of Russian influence.

Drawing from exclusive interviews with Bannon’s hidden network of far-right thinkers, years of academic research into the radical right, and with unprecedented access to the esoteric salons where they meet, Teitelbaum exposes their considerable impact on the world and their radical vision for the future.

Benjamin R. Teitelbaum is an award-winning expert on the radical right and a professor of ethnomusicology and international affairs at the University of Colorado Boulder. He is the author of Lions of the North: Sounds of the New Nordic Radical Nationalism, and has written on far-right politics for the New York Times, Wall Street Journal, Foreign Policy, Los Angeles Review of Books, and the Atlantic.

“A fast-paced account that reads like a Dan Brown novel. Rich in cinematic description, it cuts from ornate hotel lobbies to Caucasian battlefields, from Steve Bannon’s couch to a Hare Krishna ashram in Mumbai. . . . Gripping, and convincingly makes the case that eastern-themed ideas have influenced thinkers on the right.“ — Eric Kaufmann, Financial Times

“Timely, insightful and often troubling. . . War for Eternity is predominantly an attempt to understand the ideology of Bannon and other important alt-right figures. . . Teitelbaum enjoys remarkable access to them and uses his background research into the contemporary far right to fill in the gaps, draw connections and explain the bigger picture.” — Kieran Pender, Literary Review

“Insightful and immersive. . . Teitelbaum argues that Bannon's rise, alongside counterparts in countries such as Brazil and Russia, can be traced to an obscure intellectual current that you have never heard of. . . If you are interested in exploring the intellectual traditions that underpin today's populist revolt, this is a useful place to start." — Matthew Goodwin, Sunday Times

"A US scholar speaks to global far-right figures and argues that they are linked by an obscure philosophy, traditionalism...This all sounds crackpot, until you contemplate Trump’s tearing down of the US administrative state. Environmental Protection Agency, State Department, Education Department: all were handed over to people who had vowed to wreck them. . . . War for Eternity joins the dots between this newly influential philosophy and leading personalities from the global right." — Luke Harding, The Guardian

“This book has the makings of a fine Hollywood script.”
— Andrew Moravcsik, Foreign Affairs

“Teitelbaum’s quest to find the Traditionalist roots of these men is dogged… a curious tale of hidden ideas operating in the undergrowth of the far-right populist revolt.” — Martin Ivens, The Times (London)

“This is no dry academic text. Teitelbaum writes like a journalist, in a style that is engaging, empathetic but always critical. The result is a fascinating book … Informed, engaging and insightful." — Eoin Ó Broin, the Irish Times

“Cleverer and more fair-minded than most critiques.” — Chronicles

“This is a most alarming book, with a terrible, pertinent relevance. . . . The horrid truth is that this author has produced a book to make us tremble. . . . Given the complexity of the subject, it is thus surprisingly easy to read. His initial attempt was to explain how the far right hoped to change the world; now the world itself has changed, we can only hope that our democracies are strong enough to withstand.” — Julia Langdon, The Tablet

“Benjamin Teitelbaum has just published a major new book on contemporary Traditionalism…Although War for Eternity is written in light, journalistic style, it is based on thorough research…required reading.”  — Mark Sedgwick

“Enlightening and very interesting…quite honest in the way [it] discussed Steve Bannon and his objectives..” — Michael Patrick Leahy, Tennessee Star

“Very detailed and well-reasoned, an important exposé of the underpinnings of the movement.” — Michelangelo Signorine, The Signorine Report

“An intriguing new study of the western right… Traditionalism is thus occultish and mystical, beyond even a Nietzschean politics of the will, and Teitelbaum makes clear its influence” — Guy Rundle, Crikey

“Teitelbaum describes this book as a mix of ethnography and investigative journalism. It succeeds on both counts. War for Eternity demonstrates the author’s vast knowledge of the radical right and provides an accurate account of the various ideological currents he examines. Unlike most academic ethnographic studies, however, this book is exceptionally readable.” — George Hawley, author of Making Sense of the Alt-Right, Law and Liberty