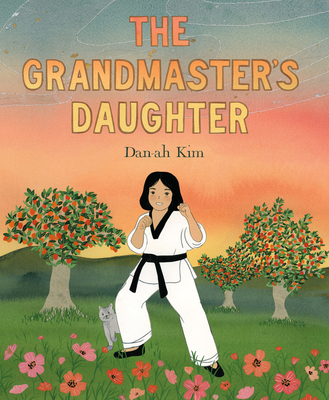 Imagination and determination fuel a young black belt as she leads her friends on a mission to protect their dojang. Author-illustrator Dan-ah Kim’s debut is a celebration of teamwork, friendship, and martial arts, and will be adored by fans of The Three Ninja Pigs and Hello, Ninja.

Sunny is the grandmaster’s daughter. She sweeps the floors, waters the plants, and practices with her nunchucks—sometimes she even makes mistakes! And she teaches other young students how to kihap. When their kihaps grow loud and bold enough to shake the mountains, Sunny leads her friends in defending the dojang against magical creatures . . . or perhaps that’s just in their imaginations. It’s up to you to decide!

Dan-ah Kim is an artist and designer born in Seoul, South Korea, and now living in Brooklyn, New York. She is also the daughter of a Tae Kwon Do grandmaster, and she grew up practicing martial arts. The Grandmaster's Daughter is her debut picture book.

Dan-ah Kim is an artist and designer born in Seoul, South Korea, and now living in Brooklyn, New York. She is also the daughter of a Tae Kwon Do grandmaster, and she grew up practicing martial arts. The Grandmaster's Daughter is her debut picture book.

“Sunny has a black belt in Tae Kwon Do and is the daughter of the grandmaster. At their dojang . . . Sunny not only practices her craft but also attends to her many responsibilities. . . . A brief note at the end summarizes the essence of the philosophy of Tae Kwon Do, and a sweet surprising element of fantasy adds a touch of humor to this gentle fictional primer about an ancient and venerated cultural tradition.” — Booklist

“Young Sunny, already an accomplished black belt, practices taekwondo at a school of martial arts. . . . She leads a taekwondo class filled with students diverse in race and abilities. As the students practice their kihaps (strong, clipped shouts), they inadvertently rouse from the mountains two mythical tigers and a sapphire-colored dragon. . . . Kim’s bright palette and energetic cartoon artwork. . . bring depth to each page. . . . A lighthearted tale of responsibility with plenty of fun.” — Kirkus Reviews

“In this gently funny picture book, readers are introduced to a quiet village, to a ‘modest dojang . . . a school of martial arts,’ and to Sunny, the dojang grandmaster’s daughter. . . . Readers are exposed to some of the basic elements and vocabulary of Tae Kwon Do. . . . The text is soothingly rhythmic, with lots of alliteration and onomatopoeia. The color palette is warm and comforting, with the soft orange of the nearby persimmon trees and the sunset conveying calm. . . . A whimsical slice of life that will appeal to many small warriors. ” — Horn Book Magazine