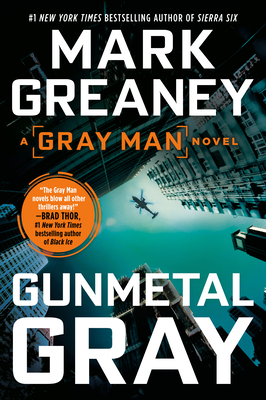 This is book number 6 in the Gray Man series.

After five years on the run Court Gentry is back on the inside at the CIA. But his first mission makes him wish he had stayed on the outs when a pair of Chinese agents try to take him down in Hong Kong. Normally the Chinese prefer to stay eyes-only on foreign agents. So why are they on such high alert?

Court’s high stakes hunt for answers takes him across Southeast Asia and leads
to his old friend, Donald Fitzroy, who is being held hostage by the Chinese. Fitzroy was contracted to find Fan Jiang, a former member of an ultra-secret computer warfare unit responsible for testing China’s own security systems. And it seems Fan may have been too good at his job—because China wants him dead.

The first two kill teams Fitzroy sent to find Fan have disappeared and the Chinese have decided to “supervise” the next operation. What they don't know is that Gentry’s mission is to find Fan first and get whatever intel he has to the US.

After that, all he has to do is get out alive...
Mark Greaney has a degree in international relations and political science. In his research for the Gray Man novels, including Agent in Place, Gunmetal Gray, Back Blast, Dead Eye, Ballistic, On Target, and The Gray Man, he traveled to more than fifteen countries and trained alongside military and law enforcement in the use of firearms, battlefield medicine, and close-range combative tactics. He is also the author of the New York Times bestsellers Tom Clancy Support and Defend, Tom Clancy Full Force and Effect, Tom Clancy Commander in Chief, and Tom Clancy True Faith and Allegiance. With Tom Clancy, he coauthored Locked On, Threat Vector, and Command Authority.
“I LOVE THE GRAY MAN.”—#1 New York Times bestselling author Lee Child

“Courtland Gentry, also known as the Gray Man, is everything you’d want in a fictional professional killer...[he] always gets the job done for the US of A, and he entertains while doing it...this one is fat, fast, and fun. Clancy's spirit lives on.”—Kirkus Reviews (stared review)

Praise for Back Blast

“Mark Greaney reigns as one of the recognized masters of action and adventure. Back Blast is no exception.”—New York Times and #1 internationally bestselling author Steve Berry

“Greaney’s unraveling of the Back Blast mystery is masterly, but it’s the Gray Man’s ability to outthink and outgun...that will keep readers glued to the pages.”—Publishers Weekly (starred review)