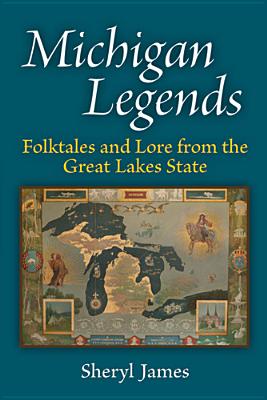 Over the course of its history, the state of Michigan has produced its share of folktales and lore. Many are familiar with the Ojibwa legend of Sleeping Bear Dunes, and most have heard a yarn or two told of Michigan’s herculean lumberjack, Paul Bunyan.

But what about Detroit’s Nain Rouge, the red-eyed imp they say bedeviled the city’s earliest residents? Or Le Griffon, the Great Lakes’ original ghost ship that some believe haunts the waters to this day? Or the Bloodstoppers, Upper Peninsula folk who’ve been known to halt a wound’s bleeding with a simple touch thanks to their magic healing powers?

In Michigan Legends, Sheryl James collects these and more stories of the legendary people, events, and places from Michigan’s real and imaginary past. Set in a range of historical time periods and locales as well as featuring a collage of ethnic traditions—including Native American, French, English, African American, and Finnish—these tales are a vivid sample of the state’s rich cultural heritage. This book will appeal to all Michiganders and anyone else interested in good folktales, myths, legends, or lore.

Sheryl James is a Pulitzer Prize–winning journalist who has written for the Detroit Free Press and the St. Petersburg Times. She is the author of The Life and Wisdom of Gwen Frostic.