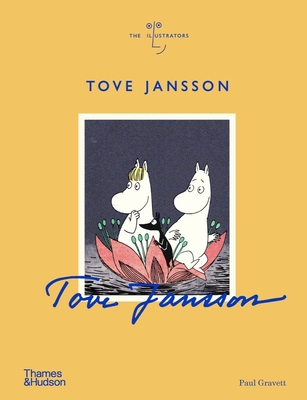 An insightful appreciation of the life and art of Tove Jansson, creator of the Moomin books, which are adored by children and adults across the globe.

This book provides fresh insight into and a deep appreciation of the life and art of Tove Jansson (1914–2001), one of the most original, influential, and perennially enjoyed illustrators of the twentieth century. In this volume Paul Gravett examines Jansson’s highly successful Moomin books, as well as her interpretations of classics such as Lewis Carroll’s Alice’s Adventures in Wonderland and The Hunting of the Snark, and J. R. R. Tolkien’s The Hobbit.

Born in Helsinki among Finland’s Swedish-speaking minority, Jansson was brought up with a love for making art and stories in a supportive, artistic family. Her first illustrated tales were published when she was fourteen years old and she went on to draw humorous and political cartoons as well as striking front covers for the satirical magazine Garm, in response to events in World War II. As she developed from art student to painter and muralist, and from bohemian to lesbian, she also created her Moomin world, which appeared in her first children’s book in 1945 and then in newspaper strips. Beyond this imaginative achievement, Jansson also wrote many novels, documented here along with personal commentaries from her own writings.

A title in The Illustrators series, which celebrates illustration as an art form, Tove Jansson offers a visually rich view into the life and work of this much-loved artist and writer.

Paul Gravett is a writer, critic, curator, publisher and broadcaster who has worked in the comics industry since 1981. He is author of many books, including Graphic Novels: Stories to Change Your Life, Comics Art, Mangasia, and Posy Simmonds in The Illustrators series. He is co-director of Comica, the London International Comics Festival.
"Jansson fans will appreciate this solid overview of the influential artist."