When I Was Young in the Mountains (Hardcover) 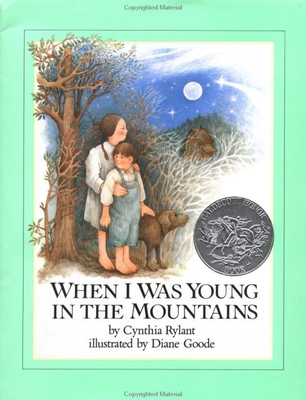 When I Was Young in the Mountains (Hardcover)


May be available in our Warehouse - will ship in 3-7 days
For twenty years, Cynthia Rylant's story of childhood in the Appalachian Mountains has been an enduring favorite. Growing up in the mountains is depicted with a spare, lyrical text and beautiful, tender illustrations by Diane Goode. The book was awarded a Caldecott Honor Medal.

To celebrate its twentieth anniversary, When I Was Young in the Mountains is being released with a commemorative copper-colored band.
As a child, Diane Goode loved books and art. She has been drawing ever since she can remember.Of Italian and French descent, she enjoyed the richness of both cultures and traveled to Europeevery summer visiting family as well as cathedrals and museums. She feels that these earlyimpressions helped shape her appreciation of art and life. She studied art history at QueensCollege, but switched to fine arts, in which she earned her degree.

Her love for Europe shows in the setting of many of her books Paris in particular, where two ofher recent picture books, Where's Our Mama? and Mama's PerfectPresent. take place. She drewon her experience of living for a short time in Pennsylvania, to do the art work for CynthiaRylant's story of Appalachia, When I Was Young in the Mountains, for which shewas awarded aCaldecott Honor Medal. Diane Goode has illustrated 27 books for children, including anthologiesand stories she has written herself. She has always been drawn to the classics and has illustratedmany of the traditional fairy tales. Of her process, she says:

"I always begin with a rough dummy and then work on the individual pages, sketching veryloosely and quickly to establish movement and composition. I do these dozens of times,repositioning enlarging, reducing, adding and omitting. There are always hundreds of sketches foreach book. It sounds tedious, but it is the most exciting part of creating a book. When I msatisfied with these, I do the final art. All of my work is done on opaline parchment, a thin butstrong paper. I sketch lightly in pencil and use water colors applied with very fine sable brushes.Sometimes I use color pencils with the paint to soften the atmosphere."

"Rylant delights in the simple joys of living with her grandparents in the Appalachian Mountains: fresh cornbread, the swimming hole, bathing in the tin tub, snakes, and the community church. Surrounding all of these memories is the loving relationship with her grandparents. Warmly rendered illustrations complement the lyrical text."--School Library Journal


"An evocative remembrance of the simple pleasures in country living; splashing in the swimming hole, taking baths in the kitchen, sharing family times, each is eloquently portrayed here in both the misty-hued scenes and in the poetic text."--Association for Childhood Education International