Richard Scarry's Cars and Trucks and Things That Go: Read Together Edition (Read Together, Be Together) (Hardcover) 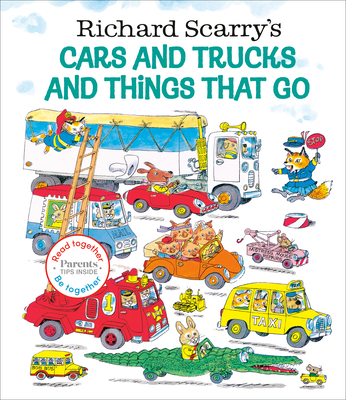 Richard Scarry's Cars and Trucks and Things That Go: Read Together Edition (Read Together, Be Together) (Hardcover)


Email or call for price.
Make family reading a regular and cherished activity with Richard Scarry's Cars and Trucks and Things That Go and READ TOGETHER, BE TOGETHER, a nationwide movement developed by Penguin Random House in partnership with Parents magazine.

It's time to start your engines in this Richard Scarry classic all about vehicles!

Buckle up for a fun-filled day of planes, trains, automobiles . . . and even a pickle truck! Featuring hundreds of clearly labeled vehicles, this is the perfect book for little vehicle fans from the one and only Richard Scarry.

Picture books in the READ TOGETHER, BE TOGETHER program are available at a low price for a limited time so that families everywhere can make the most of storytime. Other titles include:
• Horton Hears a Who (Dr. Seuss)
• Llama Llama Misses Mama (Anna Dewdney)
• The Little Engine That Could (Watty Piper)
• The Very Busy Spider (Eric Carle)
• We're All Wonders (R. J. Palacio)
RICHARD SCARRY is one of the world's best-loved children's authors EVER! In his extraordinary career, Scarry illustrated over 150 books, many of which have never been out of print. His books have sold over 100 million copies around the world, and are currently published in over twenty languages. No other illustrator has shown such a lively interest in the words and concepts of early childhood. Richard Scarry was posthumously awarded a Lifetime Achievement Award from the Society of Illustrators in 2012.