In a Garden Burning Gold: Book One of the Wind-up Garden series (Paperback) 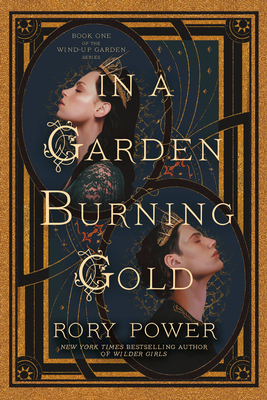 In a Garden Burning Gold: Book One of the Wind-up Garden series (Paperback)

Not in-store, but we'd be happy to order one for you.

This is book number 1 in the The Wind-up Garden series series.

“Fresh and original . . . full of lush writing and detailed worldbuilding . . . [with a] rich fantasy landscape and an almost Shakespearean feel.”—Paste

Twins imbued with incredible magic and near-immortality will do anything to keep their family in power—even if it tears the family apart—in the first book of a mythic epic fantasy duology from the New York Times bestselling author of Wilder Girls.

ONE OF THE MOST ANTICIPATED BOOKS OF 2022—BookPage

Rhea and Lexos were born into a family unlike any other. Together with their siblings, they control the seasons, the tides, and the stars, and help their father rule their kingdom. Thanks to their magic, the family has ruled for an eternity, and plan to rule for an eternity more.

But Rhea and Lexos are special: They are twins, bonded down to the bone, and for the past hundred years, that bond has protected them as their father becomes an unpredictable tyrant—and his worsening temper threatens the family’s grip on power.

Now, with rival nations ready to attack, and a rebel movement within their own borders, Rhea and Lexos must fight to keep the kingdom—and the family—together, even as treachery, deceit, and drama threaten to strand the twins on opposite sides of the battlefield.

In a Garden Burning Gold is a vividly written, atmospheric saga that explores the limits of power and the bonds of family—and how far both can be bent before they break.
Rory Power lives in Rhode Island. She has an MA in prose fiction from the University of East Anglia and is the New York Times bestselling author of Wilder Girls and Burn Our Bodies Down.

“Unapologetically vicious, with gorgeous, searing prose and a world that left me reeling . . . Rory Power has crafted my favorite kind of story, in which love and betrayal are one and the same.”—Heather Walter, author of Malice

“Set against a dazzling Mediterranean backdrop, In a Garden Burning Gold is a strikingly original and thoughtful fantasy.”—BookPage

“Alternating points of view between Rhea and Lexos highlight the emotional arcs of children wanting to both secure their parent’s love and remove themselves from his control. Immersive prose, Greek-inspired worldbuilding, and political machinations . . . Power constructs a world of magical families with layered secrets.”—Library Journal

“Power creates a distinctive magic system and has a steady hand with the complex geopolitical intrigue, building a fascinating, lived-in world.”—Publishers Weekly