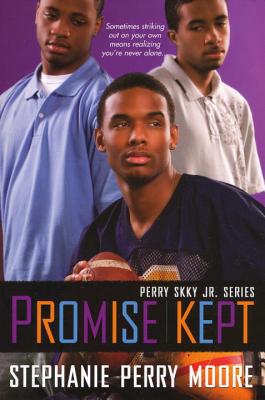 This is book number 5 in the Perry Skky Jr. series.

Promise Kept
Book 5
Perry Skky Jr. is at the point in his life where he has to decide if he is truly willing to keep his word to God... Between managing his short time during the Christmas holidays, the pressure to win the college National Championship football game, and the demands of having a steady girl, Perry is feeling the burden of being torn in more directions than he can handle. And when a night out clubbing ends with his teammate, Saxon, in the hospital, the New Year is not starting off on the right track. Unfortunately, the challenges are just beginning. From a run-in with a violent gang, to Perry's beloved grandmother falling ill, to a flirtation that turns into a temptation, Perry finds himself tested like never before. Stressed out and frustrated, Perry can't help wondering how he can put God first when so many forces seem to be working against him. Though deep down, Perry knows that his glory only lies with God on his side, he feels drawn to let his flesh lead. Can he get past his weaknesses, learn how to truly embrace God's love, and be an example that will make others want to know God...or will he screw up his life for good? Includes a guide on how to start your own book club
Stephanie Perry Moore is the author of the Perry Skky Jr., Yasmin Peace, Payton Skky, Laurel Shadrach, Carmen Browne, and the Faith Thomas Novelzine(TM) series. She also has written four adult titles, including her newest release, Wearing My Halo Tilted. Currently, she is an Executive Producer of Georgia Sky, a DVD series from Tyler Perry's 34th Street Films based on her previous works. She lives in the greater Atlanta area with her husband, Derrick, and their three children.