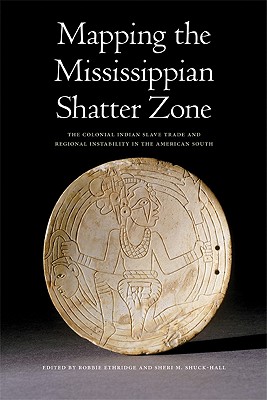 
May be available in our Warehouse - will ship in 3-7 days
During the two centuries following European contact, the world of late prehistoric Mississippian chiefdoms collapsed and Native communities there fragmented, migrated, coalesced, and reorganized into new and often quite different societies. The editors of this volume, Robbie Ethridge and Sheri M. Shuck-Hall, argue that such a period and region of instability and regrouping constituted a “shatter zone.” In this anthology, archaeologists, ethnohistorians, and anthropologists analyze the shatter zone created in the colonial South by examining the interactions of American Indians and European colonists. The forces that destabilized the region included especially the frenzied commercial traffic in Indian slaves conducted by both Europeans and Indians, which decimated several southern Native communities; the inherently fluid political and social organization of precontact Mississippian chiefdoms; and the widespread epidemics that spread across the South. Using examples from a range of Indian communities—Muskogee, Catawba, Iroquois, Alabama, Coushatta, Shawnee, Choctaw, Westo, and Natchez—the contributors assess the shatter zone region as a whole, and the varied ways in which Native peoples wrestled with an increasingly unstable world and worked to reestablish order.
Robbie Ethridge, an associate professor of anthropology at the University of Mississippi, is the author of Creek Country: The Creek Indians and Their World, 1796–1816. Sheri M. Shuck-Hall, an associate professor of history at Christopher Newport University, is the author of Journey to the West: The Alabama and Coushatta Indians. Contributors: Robin Beck, Eric E. Bowne, Robbie Ethridge, Mary Elizabeth Fitts, William A. Fox, Patricia Galloway, Charles L. Heath, Ned J. Jenkins, Matthew H. Jennings, Marvin D. Jeter, Paul Kelton, Maureen Meyers, George Edward Milne, Randolph Noe, Sheri M. Shuck-Hall, Stephen Warren, and John E. Worth.
"Editors Ethridge and Shuck-Hall have crafted a unique anthology on a little-studied subject: the very specific cause-and-effect relationships of European contact with the Mississippian world of eastern North America."—C. R. Kasee, Choice

"This edited volume combines data from archaeology, anthropology, and history to provide one of the most complete syntheses available of the impact of European colonization on Native people in the American South."—Anthony Michal Krus, American Antiquity

"This is an excellent snapshot of a welcome resurgence in sophisticated research on the pre- and early colonial South."—Lynn A. Nelson, American Historical Review

"How did the complex Mississippian societies of the American South become the decentralized Indian societies of the eighteenth century? This volume's fifteen contributors answer that question anew by employing the concept of a "shatter zone" to identify the causes of instability and map its effects in time and place. Those achievements alone make Shatter Zone noteworthy."—Steven C. Hahn, Ethnohistory

"Ethridge, through her introduction, has placed this history in dialogue with a diverse scholarship on colonialism both in North American and elsewhere in the early modern world. Perhaps now this pivotal period, no longer forgotten, will instead enjoy the wider scholarly interest that it deserves."—Joseph Hall, Journal of Southern History

"Mapping the Mississippian Shatter Zone offers one of the most complete syntheses to date about colonization's impact on Southeastern Native societies. . . . The shatter zone approach and the book's multidisciplinary approach and multicausal view will offer scholars a useful guide to studying the transformation of Native worlds well beyond the Southern colonial era."—S. Matthew DeSpain, Journal of Anthropological Research