Stand Up!: The Story of Minnesota's Protest Tradition (Paperback) 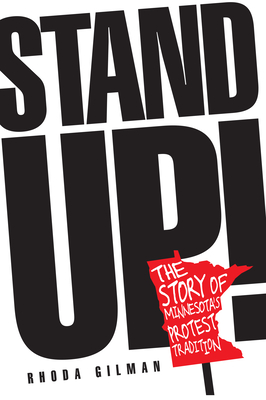 Stand Up!: The Story of Minnesota's Protest Tradition (Paperback)

When the senatorial election of 2008 between Democrat Al Franken and Republican Norm Coleman stretched on for a contentious six months, people throughout the country wondered about Minnesota’s offbeat politics. But Minnesota has been and is now a seedbed for cultural and political movements that have changed the country, and its history weaves a pattern of wide opposition between left and right.

In this broad and readable narrative, eminent Minnesota historian Rhoda R . Gilman covers the major protest movements of the last 150 years: the abolitionist Republican party, Grangers, antimonopolists, Populists, strikers, progressives, suffragists, Communists, Farmer-Laborites, communes and co-ops, abortion politics, and more. She profiles charismatic and quirky leaders like Ignatius Donnelly, Floyd B. Olson, and Paul Wellstone. Each movement, each personality, is part of the context for the others.

Stand Up! tells a story of people repeatedly challenging the status quo. It is a narrative of people against power, of conflict and defeat, but also of change and tenacity. In a forceful and inspirational conclusion, Gilman discusses the events that she herself has helped to shape and shares her vision of the future.

Rhoda R. Gilman is the author of Henry Hastings Sibley: Divided Heart and The Story of Minnesota’s Past. She is a founding member of Women Historians of the Midwest and a former candidate for lieutenant governor of Minnesota on the Green Party ticket.