The QB Bad Boy and Me (Paperback) 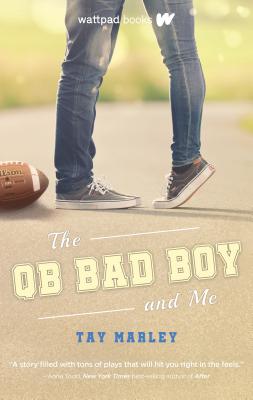 The QB Bad Boy and Me (Paperback)

Reluctant cheerleader Dallas Bryan has a problem on her hands—and his name is Drayton Lahey.

Ever since the hot star quarterback of the high school football team hit her car with his motorcycle, he has the annoying ability to get under her skin, making Dallas think about Drayton way more than she should . . . in all the ways that she shouldn't.

But Dallas has one goal—to pursue her dance-school dreams in in California—and no one, not even a hard-bodied, green-eyed football god, will stop her. As the tension between Drayton and Dallas grows thicker, the lines are getting blurred, and all she wants is to come undone under his touch.

But this thing between Dallas and Drayton could cost her her dreams . . . if he doesn't break her heart first.

Tay Marley wears many hats: bibliophile, entrepeneur, wife, mother, and featured Wattpad author. Her whirlwind journey on Wattpad began in 2017, and led to one hundred thousand dedicated followers, a five-part series, and three stand-alone books—including her breakout story, The QB Bad Boy and Me—which have amassed over forty-one million reads. She resides in New Zealand with her husband. When she isn’t writing about confident women and their love interests, she’s teaching her three small children how to be the leads in their own epic tales.