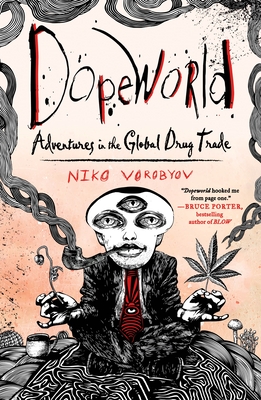 In this irreverent ode to gonzo journalism, one writer travels the globe to explore the use of recreational drugs in cultures around the world.

After I got out of jail, I was determined to find out more about how the issue of drugs not only landed me there, but has shaped the entire world: wars, scandals, coups, revolutions. I read every book, watched every documentary. I saved up to buy plane tickets. I went to Colombia, Mexico, Russia, Italy, Japan and the Afghan border—all in all, fifteen countries across five continents.

Just as Anthony Bourdain's No Reservations did for the world of food, Dopeworld is an intoxicating journey into the world of drugs. From the cocaine farms in South America to the streets of Manila, Dopeworld traces the emergence of psychoactive substances and our intimate relationship with them. As a former drug dealer turned subversive scholar, with unparalleled access to drug lords, cartel leaders, street dealers and government officials, journalist Niko Vorobyov attempts to shine a light on the dark underbelly of the drug world.

At once a bold piece of journalism and a hugely entertaining travelogue, Dopeworld is a brilliant and enlightening journey across the world, revealing how drug use is at the heart of our history, our lives, and our future.

Niko Vorobyov was born in Leningrad, Russia, before moving to Great Britain. From 2013-2014 he served a two-and-a-half year sentence for Possession with Intent to Supply. Upon his release, he graduated from University College London and began working at a Russian news outlet, Russia Today, before putting together his media, academic, and under-the-counter expertise to write a book.

"[A] terrific debut…Vorobyov makes a persuasive case for the legalization of drugs...It could well become a classic.” --Publishers Weekly (starred)

“An entertaining excursion into the narcotics trade by a one-time practitioner…A revealing treatise that provides ample ammunition for the legalize-it crowd.” —Kirkus Reviews

"Dopeworld hooked me from page one on out—as engrossing and informative as it is fun to read. A winner!" - Bruce Porter, bestselling author of Blow: How a Small-Town Boy Made $100 Million with the Medellin Cocaine Cartel and Lost It All and Snatched: From Drug Queen to Informer to Hostage

"A free-rolling and frank depiction of the global narcotics scene. Fascinating." —The Spectator (UK)

"An obsessive, immersive account of all aspects of the drug culture—its ways, its rules, its rituals, its rhythms, its language." —Irish Examiner (UK)