Are We the 99%?: The Occupy Movement, Feminism, and Intersectionality (Paperback) 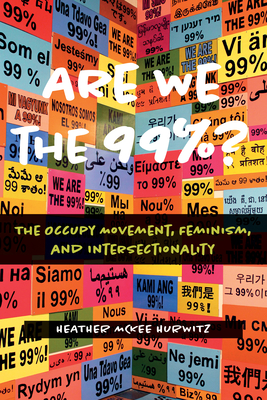 Are We the 99%?: The Occupy Movement, Feminism, and Intersectionality (Paperback)

The protestors that comprised the Occupy Wall Street movement came from diverse backgrounds. But how were these activists—who sought radical social change through many ideologies—able to break down oppressions and obstacles within the movement? And in what ways did the movement perpetuate status-quo structures of inequality?

Are We the 99%? is the first comprehensive feminist and intersectional analysis of the Occupy movement. Heather McKee Hurwitz considers how women, people of color, and genderqueer activists struggled to be heard and understood. Despite cries of “We are the 99%,” signaling solidarity, certain groups were unwelcome or unable to participate. Moreover, problems with racism, sexism, and discrimination due to sexuality and class persisted within the movement.

Using immersive first-hand accounts of activists’ experiences, online communications, and media coverage of the movement, Hurwitz reveals lessons gleaned from the conflicts within the Occupy movement. She compares her findings to those of other contemporary protest movements—nationally and globally—so that future movements can avoid infighting and deploy an “intersectional imperative” to embrace both diversity and inclusivity.

Heather McKee Hurwitz is a Lecturer of Sociology and feminist scholar at Case Western Reserve University and a Visiting Researcher at the Cleveland Clinic.