Getting What We Need Ourselves: How Food Has Shaped African American Life (Hardcover) 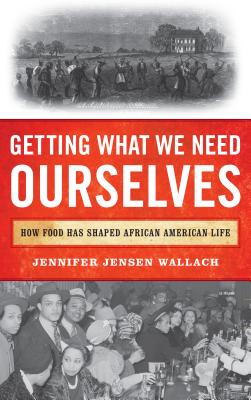 Getting What We Need Ourselves: How Food Has Shaped African American Life (Hardcover)

This item is not available for sale on this site.

Beginning with an examination of West African food traditions during the era of the transatlantic slave trade and ending with a discussion of black vegan activism in the twenty-first century, Getting What We Need Ourselves: How Food Has Shaped African American Life tells a multi-faceted food story that goes beyond the well-known narrative of southern-derived "soul food" as the predominant form of black food expression. While this book considers the provenance and ongoing cultural resonance of emblematic foods such as greens and cornbread, it also examines the experiences of African Americans who never embraced such foods or who rejected them in search of new tastes and new symbols that were less directly tied to the past of plantation slavery. This book tells the story of generations of cooks and eaters who worked to create food habits that they variously considered sophisticated, economical, distinctly black, all-American, ethical, and healthful in the name of benefiting the black community. Significantly, it also chronicles the enduring struggle of impoverished eaters who worried far more about having enough to eat than about what particular food filled their plates. Finally, it considers the experiences of culinary laborers, whether enslaved, poorly paid domestic servants, tireless entrepreneurs, or food activists and intellectuals who used their knowledge and skills to feed and educate others, making a lasting imprint on American food culture in the process. Throughout African American history, food has both been used as a tool of empowerment and wielded as a weapon. Beginning during the era of slavery, African American food habits have often served as a powerful means of cementing the bonds of community through the creation of celebratory and affirming shared rituals. However, the system of white supremacy has frequently used food, or often the lack of it, as a means to attempt to control or subdue the black community. This study demonstrates that African American eaters who have worked to creative positive representations of black food practices have simultaneously had to confront an elaborate racist mythology about black culinary inferiority and difference. Keeping these tensions in mind, empty plates are as much a part of the history this book sets out to narrate as full ones, and positive characterizations of black foodways are consistently put into dialogue with distorted representations created by outsiders. Together these stories reveal a rich and complicated food history that defies simple stereotypes and generalizations.
Jennifer Jensen Wallach is associate professor of history at the University of North Texas. She is the author, most recently, of How America Eats: A Social History of U.S. Food and Culture and Richard Wright: From Black Boy to World Citizen. She is also the editor of the University of Arkansas Press' Food and Foodways series.