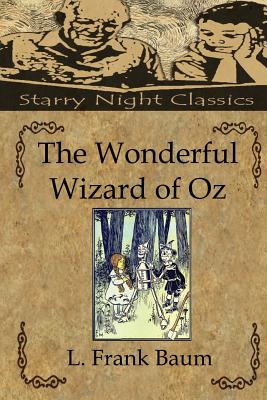 
May be available in our Warehouse - will ship in 3-7 days
A true classic of American literature and possibly the first true American fairy tale; The Wonderful Wizard of Oz has thrilled readers for more than a century. First published in 1900, L. Frank Baum's story of Dorothy's trip to the land of Oz on a tornado and all of the fantastic characters that she meets there. Rediscover the original story and travel along the yellow-brick road to the Emerald City with Dorothy, Toto, the Tin Woodman, the Scarecrow, the Cowardly Lion, Glinda, the Wizard, the Munchkins, the winged monkeys and the Wicked Witch as they learn important lessons about themselves along the way and Dorothy learns that there's no place like home.
Lyman Frank Baum was born on May 15, 1856 in Chittenango, New York. He was educated at home until age twelve, when he was shipped off to the Peekskill Military Academy where he spent much of his time daydreaming. After only two years, he returned home and began writing. In 1882, Baum married Maud Gage, with whom he would spend the rest of his life. For a shot time, they opened a bazaar in the Dakota's, but his kindness at extending credit for items, caused the business to go bankrupt. In 1897, he published his first book, "Mother Goose in Prose," which was a moderate success and in 1899, he wrote "Father Goose, His Book," which was the best-selling children's book of that year. Baum wrote a total of fourteen "Oz" books, as well as a total of 59 novels including the "Aunt Jane" series under the name Edith Van Dyne, 83 short stories, and more than 200 poems. He also tried his hand at stage musicals and movies. He died from a stroke on May 6, 1919, just 9 days short of his 63rd birthday and a year before "Glinda of Oz" was published, leaving a legacy that would enchant generations.