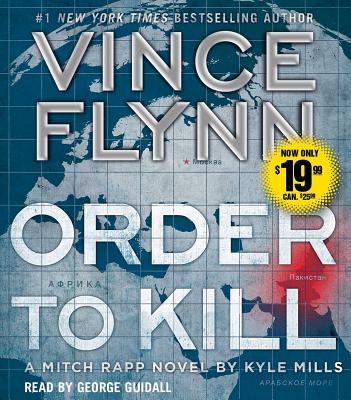 This is book number 13 in the A Mitch Rapp Novel series.

America’s deadliest covert operative might have met his match as he goes deep undercover to prevent Russia from fomenting chaos in the Middle East in this action-packed novel in the #1 New York Times bestselling series starring Mitch Rapp—“the best hero the thriller genre has to offer” (The Real Book Spy).

Mitch Rapp is used to winning.

But the CIA operative finds himself chasing false leads from continent to continent in an effort to keep Pakistani nukes from falling into the hands of terrorists. Together with friend and colleague Scott Coleman, Rapp struggles to prevent the loss of these lethal weapons, particularly because Russia is also interested in the nukes, though not for the same reason as Rapp and Coleman.

Soon, it becomes alarmingly clear that the forces in Moscow are bent on fomenting even more chaos and turmoil in the Middle East, and Rapp must go deep into Russian territory, posing as an American ISIS recruit. There, he uncovers a plan much more dangerous and insidious than he ever expected, one that could have far-reaching and catastrophic consequences.

Another “best of the best in the high-adventure, action-heavy thriller field” (Booklist, starred review), Order to Kill is a provocative and timely roller-coaster ride of a novel.
#1 New York Times bestselling author Vince Flynn (1966–2013) created one of contemporary fiction’s most popular heroes: CIA counterterrorist agent Mitch Rapp, featured in thirteen of Flynn’s acclaimed political thrillers. All of his novels are New York Times bestsellers, including his stand-alone debut novel, Term Limits.