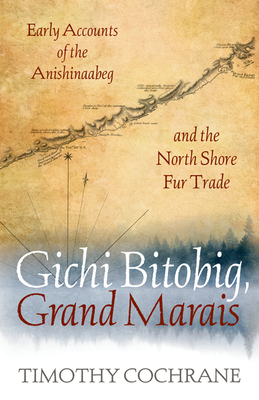 Long after the Anishinaabeg first inhabited and voyageurs plied Lake Superior’s North Shore in Minnesota, and well before the tide of Scandinavian immigrants swept in, Bela Chapman, a clerk of John Jacob Astor’s American Fur Company, fetched up in Gichi Bitobig—a stony harbor now known as Grand Marais. Through the year that followed, Chapman recorded his efforts on behalf of Astor’s enterprise: setting up a working post to compete with the Hudson Bay Company, establishing trading relationships with the local Anishinaabeg, and steering a crew of African-Anishinaabeg, Yankee, Virginian, and Métis boatmen. The young clerk’s journal, and another kept by his successor, George Johnston, provides a window into a story largely lost to history. Using these and other little known documents, Timothy Cochrane recreates the drama that played out in the cold weather months in Grand Marais between 1823 and 1825.

In its portrayal of the changing fur trade on the great lake, Gichi Bitobig, Grand Marais offers a rare glimpse of the Anishinaabeg—especially the leader Espagnol—as astute and active trading partners, playing the upstart Americans for competitive advantage against their rivals, even as the company men contend with the harsh geographic realities of the North Shore.

Through the words of long-ago witnesses, the book recovers both the too-often overlooked Anishinaabeg roots and corporate origins of Grand Marais, a history deeper and more complex than is often told. Gichi Bitobig, Grand Marais recalls a time in northern Minnesota when men of the American Fur Company and the Anishinaabeg navigated the shifting course of progress, negotiating the new perils and prospects of commerce’s westward drift.

Timothy Cochrane worked as a backcountry ranger, historian, anthropologist, and superintendent for the National Park Service in Alaska, Minnesota, and Michigan. He has worked extensively with Native American tribes, most recently with the Grand Portage Band of the Lake Superior Chippewa as superintendent at Grand Portage National Monument. His books include A Good Boat Speaks for Itself (Minnesota, 2002) and Minong—The Good Place: Ojibwe and Isle Royale.

"Gichi Bitobig, Grand Marais reveals how the lives of local fur traders and the area’s indigenous people were shaped and influenced by Lake Superior and its watershed. Fascinating personal, local, cultural, and economic details provide insight into how both cultures were buffeted by and in the grip of political and economic forces not much different from those familiar to us today."—Chel Anderson, coauthor of North Shore: A Natural History of Minnesota’s Superior Coast

"Absorbing. Gichi Bitobig, Grand Marais integrates the histories, traditions, and practical everyday lifestyle of the Anishinaabeg and their new neighbors of the fur trade into the magic of this special place."—Linda LeGarde Grover, author of Onigamiising: Seasons of an Ojibwe Year

"Gichi Bitobig, Grand Marais offers an insider's view of the fur trade and the people of the Grand Marais area during a little-known period, 1823-1825. Well-known names come to life, both Anishinaabeg and company employees, as Timothy Cochrane explains and interprets the almost-forgotten journals of Bela Chapman and George Johnston. Anyone interested in the Ojibwe people and the fur trade will find this work a valuable contribution to Minnesota history."—Theresa Schenck, University of Wisconsin–Madison

"The book is populated with interesting characters from Minnesota's days as a territory — traders and Anishinaabeg alike, who eked out an existence in and around Gichi Bitobig."—Star Tribune

"Cochrane makes a bid to shift attention of fur trade historians toward the U.S. side of the border, and has written a book that will appeal to academics and local history enthusiasts in equal measure."—Transmotion

"Cochrane’s study is a worthy contribution to the historiography of the Anishinaabeg people that may prove especially intriguing to those interested in fur trade history. For readers with little or no knowledge of the history of Ojibwe people in Minnesota, the text is useful and accessible. People interested in pre-statehood and fur trade history, Native-white relations, or Ojibwe culture and history will find Gichi Bitobig engaging and insightful. Specialists in the field will find it perceptive for its examination of an under-researched place."—Minnesota History

"From the bare bones of these few obscure journals and logs, Cochrane has fleshed out a place-based history that is equally attentive to Anishinaabeg and Euro-American experiences and actions along Lake Superior’s north shore."—Early American Literature