False Alarm: How Climate Change Panic Costs Us Trillions, Hurts the Poor, and Fails to Fix the Planet (Hardcover) 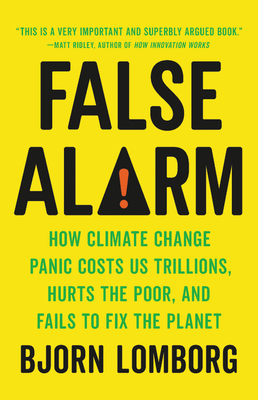 False Alarm: How Climate Change Panic Costs Us Trillions, Hurts the Poor, and Fails to Fix the Planet (Hardcover)


Email or call for price.
The New York Times-bestselling "skeptical environmentalist" argues that panic over climate change is causing more harm than good
Hurricanes batter our coasts. Wildfires rage across the American West. Glaciers collapse in the Artic. Politicians, activists, and the media espouse a common message: climate change is destroying the planet, and we must take drastic action immediately to stop it. Children panic about their future, and adults wonder if it is even ethical to bring new life into the world.
Enough, argues bestselling author Bjorn Lomborg. Climate change is real, but it's not the apocalyptic threat that we've been told it is. Projections of Earth's imminent demise are based on bad science and even worse economics. In panic, world leaders have committed to wildly expensive but largely ineffective policies that hamper growth and crowd out more pressing investments in human capital, from immunization to education.
False Alarm will convince you that everything you think about climate change is wrong -- and points the way toward making the world a vastly better, if slightly warmer, place for us all.
Bjorn Lomborg is the best-selling author of The Skeptical Environmentalist and Cool It. He is a visiting professor at Copenhagen Business School and at the Hoover Institution at Stanford. His work appears regularly in New York Times, Wall Street Journal, the Economist, the Atlantic, and Forbes. His monthly column appears in around 40 papers in 19 languages, with more than 30 million readers. In 2011 and 2012, Lomborg was named Top 100 Global Thinker by Foreign Policy. In 2008 he was named "one of the 50 people who could save the planet" by the Guardian. He lives in Prague.

"Lomborg does not lack solutions. In False Alarm, he advocates a range of cost-benefit tested policies to address both climate change and global poverty.... Lomborg does a service in calling out the environmental alarmism and hysteria that obscure environmental debates rather than illuminate them."—National Review

“It’s precisely because the problem is so serious that [Lomborg] argues it is necessary to approach it cool-headedly….The alternative? In Lomborg’s view it is letting ourselves be panicked into the most expensive course—trying to fix the climate without having the necessary technology on hand. Lomborg argues powerfully that this is a fool’s errand….A corrective to many of the green assumptions that dominate the media.”
—Financial Times

"Meticulously researched, and well worth a read."—Forbes

“An excellent summary of the madness, hypocrisy, and cynicism of the climate-alarm establishment.... Lomborg has done an excellent job pointing out that climate fears are indeed a ‘false alarm,’ misdirecting time and resources away from real, and soluble, problems.”—New Criterion

"An important book. Mr. Lomborg is a long-standing environmentalist regarded as a heretic by hardliners in the movement because he is an optimist who says that humanity is not doomed."—Iain Martin, The Times (UK)

“Lomborg is persuasive on the vulnerability of Africa and need for greater emphasis on building climate resilience.”—The Irish Times

"The best way to deal with global warming is to increase global prosperity.... The choice we face, Lomborg writes, is between a human future driven by fear and one driven by ingenuity. On that, he is exactly right."—The Bulwark

“False Alarm is a comprehensive analysis of the issues in climate change that represents a reasoned balance between the shrill voices demanding immediate change (without being aware of the practical issues involved) and those who see no problems at all with our current environmental situation.”—New York Journal of Books

"Lomborg's most basic premise remains that there are better ways to alleviate human misery than spending taxpayer subsidies than on panic-driven, political non-solutions to a changing climate. Few would argue with that goal."—American Thinker

“Lomborg’s work is impossible for alarmists to ignore.”—Heartland Institute

“In between the cries of imminent apocalypse and outright denial that seems to be the daily fare of the mainstream and alternative news outlets on the issue of global warming, Bjorn Lomborg sounds a rare note of sanity and moderation in his new book, False Alarm. Lomborg’s achievement is in providing a much-needed broader context to the climate debate, based on years of researching and writing on the topic....One hopes that this book will bring to the attention of the general public, specialists and policy-makers, not just the scale of the problem of climate change, but the most positive steps that can be taken by governments to address it.”
—International Journal of World Peace

"Lomborg brands climate change warnings as alarmist, and argues that a massive reduction in fossil fuels would exacerbate global poverty, in this detailed account.... Lomborg is careful to back his cost-benefit analyses of climate policies with surveys and statistics."—Publishers Weekly

"[Lomborg] follows his previous critiques of climate change policy...with a hard-hitting analysis of failing strategies for addressing what he acknowledges is 'a real problem.'...A serious, debatable assessment of a controversial global issue."—Kirkus

"Bjorn Lomborg's new book offers a data-driven, human-centered antidote to the oft-apocalyptic discussion characterizing the effect of human activity on the global climate. Careful, compelling, and above all sensible and pragmatic."—Jordan Peterson, author of 12 Rules for Life

"This is a very important and superbly argued book. Those who have been persuaded that climate change is not happening, and those who think catastrophe is imminent should both read it and know they can rely on Lomborg's meticulous analysis to put them right. The rest of us can be alarmed by his relentless revelation that the world is spending a fortune on making the plight of the poor and the state of the environment worse with foolish and expensive policies."—Matt Ridley, author of How Innovation Works

"False Alarm is a timely and important book. Based on the latest scientific evidence and rigorous economic analysis, it provides a welcome antidote to widespread, irrational panic about a coming climate apocalypse. Instead, it provides a set of smart, rational policies for addressing global warming -- while not losing sight of the myriad other problems that beset our planet, including poverty and inequality. This book is essential reading for anyone who cares about our shared human future."—Justin Yifu Lin, former chief economist, the World Bank

"This is a fantastic book. In it, Bjorn Lomborg examines through the lens of statistics the apocalyptic projections of the future of climate change. He points out, rightly, that the doomsday scenarios are misguided and that policy decisions driven by panic have real costs, particularly for the poor. False Alarm is a must-read."—Bibek Debroy, Chairman, Economic Advisory Council to the Prime Minister of India

"Bjorn Lomborg is that rare thing: a clear-sighted realist about climate change. In False Alarm, he argues that it would be foolish to do nothing to prepare for a warmer planet, but it would be more foolish to pretend that we are doing things that will significantly reduce carbon dioxide emissions when we are not. At the same time, getting serious about cutting CO2 emissions will have a cost. As Lomborg says, vastly more people die as a consequence of poverty and disease each year than die as a consequence of global warming. As in the past, we humans are capable of adapting to climate change in ways that can significantly mitigate its adverse effects, without choking off economic growth. To learn how, you must read False Alarm."—Niall Ferguson, the Hoover Institution, Stanford University