Teens Cook: How to Cook What You Want to Eat [A Cookbook] (Paperback) 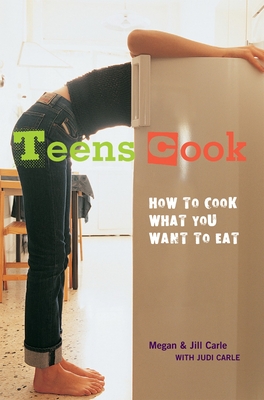 Teens Cook: How to Cook What You Want to Eat [A Cookbook] (Paperback)


May be available in our Warehouse - will ship in 3-7 days
Cooking for teens, like finding the perfect gift for teen boys and girls, is almost impossible.

Teenagers like what they like, and they will only eat what they like. But instead of causing mealtime strife, now they can learn to cook those foods themselves. With over 75 delicious recipes for meals at all times of the day—breakfast, snacks, sides, dinners, and dessert, too—Teens Cook is a guide to everything teenagers (and tweens) need to learn about conquering the kitchen without accidentally setting the house on fire. Written by teens and for teens in easy-to-follow instructions, authors Megan and Jill Carle give young readers advice on how to maneuver their kitchen in a language they’ll understand (and actually listen to). The Carle sisters pass on their knowledge of how to decipher culinary vocabulary, understand kitchen chemistry (why stuff goes right and wrong when cooking), adapt recipes to certain dietary restrictions (like vegetarianism), and avoid all sorts of possible kitchen disasters.

Teens Cook is not only a fantastic teen gift—it’s the perfect cookbook to inspire young adults to take interest in their diets, and empower them to try a new and tasty hobby.
MEGAN CARLE and JILL CARLE are both graduate students at Arizona State University. They published their first cookbook, TEENS COOK, while Jill was still in high school, and followed up with TEENS COOK DESSERT and COLLEGE COOKING.

JUDI CARLE has served as chef/author, project coordinator, and general editor on more than 20 cookbooks, including the best-selling Charlie Trotter series and, most recently, Shakespeare'¬?s Kitchen. The Carles all live in Phoenix, Arizona.