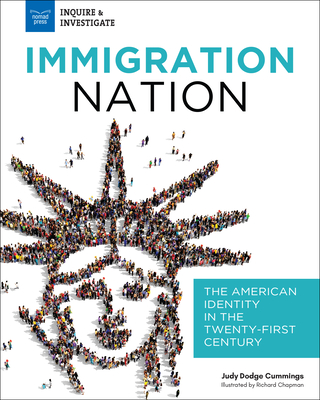 What does it mean to be an immigrant today? Has the immigrant experience changed since the last century?

Immigration Nation: The American Identity in the Twenty-First Century invites middle and high schoolers to explore the history of immigration in the United States, along with immigration law and statistics through the perspectives of immigrants, citizens, policy makers, and border agents.

For more than a century, an immigrant from France has stood vigil in the New York Harbor. At 350 feet tall, with a majestic spiked crown upon her head, a tablet of laws clutched in one hand and a torch held aloft in the other, the lady is hard to miss. She cries out to the world, "Give me your tired, your poor...I lift my lamp beside the golden door " Millions of immigrants have answered the Statue of Liberty's call, passing over, under, or through the Golden Door to become Americans.

However, on the eve of its 250th birthday, the United States is in the middle of an identity crisis. Should this land of immigrants open the door open to outsiders, people hungry for opportunity and desperate for freedom? Or should the country shut the golden door, barring entry to all but a select few? And what does it mean to be an American? How citizens answer these questions in the early twenty-first century will determine the future of America's identity.

Immigration Nation includes critical-thinking activities and research exercises to encourage readers to dive deep into the topic and consider viewpoints from many different identities. Interesting facts, links to online primary sources and other supplemental material, and essential questions take readers on an exploration of the past, present, and future of immigration.

Immigration Nation is part of a set of four books called Inquire & Investigate Social Issues of the Twenty-First Century, which explores the social challenges that have faced our world in the past and that continue to drive us to do better in the future. Other titles in this set are Gender Identity, Feminism, and Race Relations.

Nomad Press books integrate content with participation, encouraging readers to engage in student-directed learning as opposed to teacher-guided instruction. This student-centered approach provides readers with the tools they need to become inquiry-based learners. Common Core State Standards and National Curriculum Standards for Social Studies all place project-based learning as key building blocks in education. Combining content with inquiry-based projects stimulates learning and makes it active and alive. As informational texts, our books provide key ideas and details from which readers can make their own inferences. Nomad's unique approach simultaneously grounds kids in factual knowledge while allowing them the space to be curious, creative, and critical thinkers.

Judy Dodge Cummings has published 20 nonfiction books for children and teens. She was a history teacher for 26 years and has an MFA in creative writing from Hamline University. She is the author of several titles from Nomad Press, including Rebels and Revolutions: Real Tales of Radical Change in America and Human Migration: Investigate the Global Journey of Humankind. Judy lives in Reedsburg, Wisconsin. Richard Chapman holds a Master of Fine Arts degree from Vermont College. He lives in Tennessee with his wife and twins.