The Mitford Affair: A Novel (Hardcover) 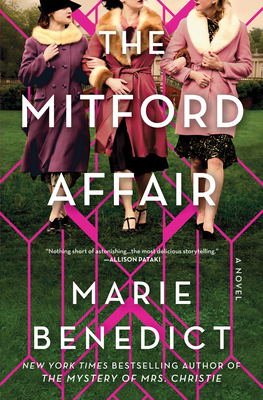 The Mitford Affair: A Novel (Hardcover)

"Plunges readers into a world of glamorous, charismatic young British debutantes and then turns that shiny world on its head...the most delicious storytelling." —Allison Pataki, New York Times bestselling author of The Magnificent Lives of Marjorie Post

From New York Times bestselling author Marie Benedict comes an explosive novel of history's most notorious sisters, one of whom will have to choose: her country or her family?

Between the World Wars, the six Mitford sisters—each more beautiful, brilliant, and eccentric than the next—dominate the English political, literary, and social scenes. Though they've weathered scandals before, the family falls into disarray when Diana divorces her wealthy husband to marry a fascist leader and Unity follows her sister's lead all the way to Munich, inciting rumors that she's become Hitler's mistress.

As the Nazis rise in power, novelist Nancy Mitford grows suspicious of her sisters' constant visits to Germany and the high-ranking fascist company they keep. When she overhears alarming conversations and uncovers disquieting documents, Nancy must make excruciating choices as Great Britain goes to war with Germany.

Probing the torrid political climate in the lead-up to World War II and the ways that seemingly sensible people can be sucked into radical action, The Mitford Affair follows Nancy's valiant efforts to stop the Nazis from taking over Great Britain, and the complicated choices she must make between the personal and the political.

The Only Woman in the Room

The Mystery of Mrs. Christie

"Truth, it's often said, is stranger than fiction. The Mitford Sisters could put that idea to the test...this new novel by Marie Benedict takes one of the most fraught moments in the family's history and uses it as the basis for a fun, compelling, and deliciously mannered saga. It might not be actual history, but we certainly don't mind." — Town & Country

"Captures the mood of a certain element of upper-class England in the years leading up to World War II. Appearances by historical figures like Winston Churchill and Evelyn Waugh round out the story. Fans of World War II historical fiction will be fascinated." — Library Journal

"This engaging tale of genteel spies shifts easily between the sisters’ perspectives and provides timely insight...Benedict’s silky-smooth page-turner is sure to please her fans." — Publishers Weekly

"Timely and suspenseful, The Mitford Affair is an immersive, spellbinding novel that illuminates the terrible allure fascism holds for some, as well as the courage and moral clarity that enable others to resist even when beloved friends and family succumb." — Jennifer Chiaverini, New York Times bestselling author of Resistance Women

"An in-depth exploration of the complications and bonds of sisterhood. Benedict perfectly captures the anxiety and uncertainty of England’s interwar years and serves as a timely reminder of the dangers of enigmatic autocrats. Fast-paced and eye-opening." — Fiona Davis, New York Times bestselling author of The Magnolia Palace

"In her latest book The Mitford Affair, Benedict plunges readers into a world of glamorous, charismatic young British debutantes and then turns that shiny world on its head. I was blown away--learning this true story of the Mitford sisters and the roles they played for and against the Nazis was nothing short of astonishing. Benedict delivers with all that readers have come to love and expect from her: nuance, elan, and the most delicious storytelling." — Allison Pataki, New York Times bestselling author of The Magnificent Lives of Marjorie Post

"Benedict unflinchingly peels away the giddy facade, revealing the tragedy beneath the one-liners in this close look at the Mitfords' darkest hour: the family's embrace of fascism and flirtation with treason in the face of World War II." — Lauren Willig, New York Times bestselling author

"Marie Benedict brings to life a dark chapter of World War II. Through grit and perseverance, three sisters – each more dazzling and intelligent than the last – work their way into the highest echelons of power. What happens when one no longer recognizes the siblings she was raised with? When caring turns to callousness? When love turns to rivalry? When the only choice is willful blindness or whistleblowing? One woman must decide whether to betray her sister or her country in this meticulously researched page-turner. Masterful." — Janet Skeslien Charles, New York Times bestselling author of The Paris Library