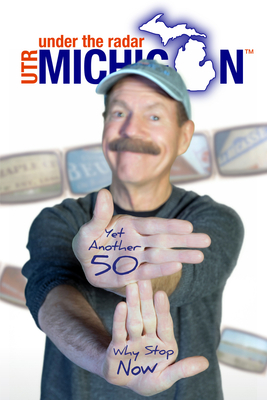 Under the Radar Michigan is an Emmy award winning PBS television series that features the cool people, places, and things that make Michigan an awesome place to live, work, and play. Chapter by chapter, we take you along fifty episodes and discover great Michigan cities, interesting people, incredible restaurants, romantic spaces, and great places to vacation with the whole family.

In this (our third) book, we take on the challenge of charter fishing, expand your mind at multiple museums, and even take you on a righteous road trip for two. You’ll learn where you can luge, go dog sledding, venture into ice caves, and even walk through the trees with ease. This book will take you to wineries, breweries, great golf courses, incredible parks, and to some of Michigan’s most exciting cities and far-away places. From penguins to a Celtic festival, philanthropists and confectioners, you won't believe what and who are right in your own backyard.

For the third time, join us and we guarantee you'll learn so much about Michigan you didn't know, you'll never want to leave. Grab your car keys and our guides and make Michigan your next adventure.

Jim Edelman’s path to television producer started right where you’d think—in radio. UTR fulfills his lifelong mission to combine the best of his sales skills with his unmatched creativity. His love of storytelling and searching for offbeat, little-known stories makes the discoveries of UTR a perfect ending. Jim attended many colleges but learned more working for the Detroit Pistons, as a Ski Instructor, Cycle Racing Producer, Tomato Picker, and Baker’s Assistant. He lives in Salem, Michigan and insists that he’s quite normal despite owning three cats. Tom Daldin is an Emmy award-winning producer, actor, and writer who has created programs that have aired across Michigan and around the U.S. and in Canada on PBS. He has also won several best actor awards in both commercial television and industrial films. Tom, his wife, Cathy, and their children have turned Michigan into their vacation playground, exploring its many wonders and attractions. Tom loves people and loves where he lives.
Praise for Under The Radar Michigan: The First 50 (book 1 in Under The Radar Michigan Travel Series):

"A beautifully illustrated and organized (commendably cross-indexed, too) guide to culture and personalities purely Michigan. . . Reads like a backyard hangout." —Library Journal