The Candy House: A Novel (CD-Audio) 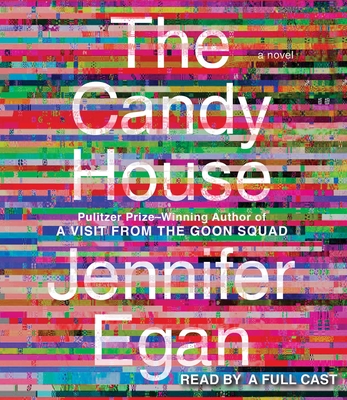 The Candy House: A Novel (CD-Audio)

“Egan weaves together these seemingly disparate characters and storylines into a stunning ending. The Candy House is about family, connection, legacy, technology, and so much more. It is her best work yet.”
— Ariana Paliobagis, Country Bookshelf, Bozeman, MT

One of Barack Obama’s Summer Favorites!
An NPR Top Pick for 2022!

From one of the most celebrated writers of our time comes an “inventive, effervescent” (Oprah Daily) novel about the memory and quest for authenticity and human connection.

The Candy House opens with the staggeringly brilliant Bix Bouton, whose company, Mandala, is so successful that he is “one of those tech demi-gods with whom we’re all on a first name basis.” Bix is forty, with four kids, restless, and desperate for a new idea, when he stumbles into a conversation group, mostly Columbia professors, one of whom is experimenting with downloading or “externalizing” memory. Within a decade, Bix’s new technology, “Own Your Unconscious”—which allows you access to every memory you’ve ever had, and to share your memories in exchange for access to the memories of others—has seduced multitudes.

In the world of Egan’s spectacular imagination, there are “counters” who track and exploit desires and there are “eluders,” those who understand the price of taking a bite of the Candy House. Egan introduces these characters in an astonishing array of narrative styles—from omniscient to first person plural to a duet of voices, an epistolary chapter, and a chapter of tweets. Intellectually dazzling, The Candy House is also a moving testament to the tenacity and transcendence of human longing for connection, family, privacy, and love.

“A beautiful exploration of loss, memory, and history” (San Francisco Chronicle), “this is minimalist maximalism. It’s as if Egan compressed a big 19th-century novel onto a flash drive” (The New York Times).
Jennifer Egan is the author of six previous books of fiction: Manhattan Beach, winner of the Andrew Carnegie Medal for Excellence in Fiction; A Visit from the Goon Squad, which won the Pulitzer Prize and the National Book Critics Circle Award; The Keep; the story collection Emerald City; Look at Me, a National Book Award Finalist; and The Invisible Circus. Her work has appeared in The New Yorker, Harper’s Magazine, Granta, McSweeney’s, and The New York Times Magazine. Her website is JenniferEgan.com.

Michael Boatman spends his days and nights pretending to be other people. For a living. He’s acted in television shows such as The Good Wife, China Beach, Spin City, ARLI$$, Anger Management, Instant Mom; films such as Hamburger Hill, The Glass Shield, Bad Parents; and Broadway plays. MichaelBoatman.us, Twitter.com/MichaelBoatman

"The ensemble performance of this novel is exceptional. Michael Boatman narrates the opening chapter at the right pace with the right intonation. He captures the interior life of the enigmatic Bix Boughton, a social media genius who invents the world-altering technology “Own Your Unconscious,” which is crucial to the plot. Alex Allwine delivers a haunting automaton-like second-person narration of the chapter titled “Lulu the Spy, 2032,” Tyra Lynne Barr emulates the chirpy sound of 13-year-old Molly in “The Perimeter After-Molly,” and Dan Bittner supplies sharply insightful tone as Ames, whose life story ends this imaginative tour de force. The time-traveling chapters reprise some of the characters from Egan’s award-winning VISIT FROM THE GOON SQUAD, but this novel has a wider timeframe, a greater trajectory, and a more complex plot."
— Winner of an AudioFile Earphones Award, AudioFile Magazine

“The successful translation of all this complexity to the audio environment is no small achievement, with 20 perfectly cast narrators, among them actor Lucy Liu, adding vibrant humanity without sacrificing comprehension.”
— Marion Winik