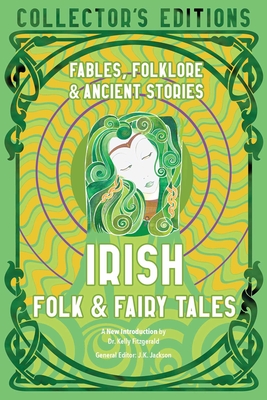 Fairy stories, especially from the fertile landscape of Ireland where the supernatural grew from the legends of the Celts, are the magic stories of everyday folk seeking solutions to the challenges of the day. This spritely new collection brings together the fables and stories of banshees, kings, trembling farmers, tricksters and beloved princesses. ‘Smallhead and the King's Sons’ (a Cinderella story) and ‘The Haughty Princess’ (recalling Grimm’s ‘Kings Thrushbeard’) are amongst the many delightful tales of hope and reckless determination.

Flame Tree Collector's Editions present the foundations of speculative fiction, authors, myths and tales without which the imaginative literature of the twentieth century would not exist, bringing the best, most influential and most fascinating works into a striking and collectable library. Each book features a new introduction and a Glossary of Terms.
Professor Kelly Fitzgerald is Head of Irish Folklore & Ethnology at University College Dublin. She sits on the editorial board of Béaloideas: The Journal of the Folklore Society of Ireland. She’s also Chairperson of ANU Productions, a Director of the National Folklore Foundation, and current President of the Royal Society of Antiquaries of Ireland.