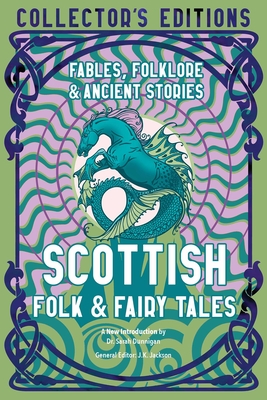 
On Our Shelves Now
Scottish tales collected here are rooted in the lochs and highlands of the landscape.

Scottish folk and fairy tales are full of mischief and malevolence, with spirits and goblins, bogies, witches, kelpies and mer-folk lurking in every corner of the land, behind every tree and craggy rock at midnight. In these pages lurk the Fairy queen, and the Sith, or silent folk, who mingle with animals that speak of prophesy and lore, and enchantments that rule the twilight.

Flame Tree Collector's Editions present the foundations of speculative fiction, authors, myths and tales without which the imaginative literature of the twentieth century would not exist, bringing the best, most influential and most fascinating works into a striking and collectable library. Each book features a new introduction and a Glossary of Terms.
Sarah Dunnigan teaches and writes about Scotland’s medieval and renaissance literature, folklore, early women writers, ballads, fairy tales and children’s literature. She edited Violet Jacob’s fairy tale collection, The Golden Heart (1904) and, co-edited The Land of Story Books: Scottish Children’s Literature in the Long Nineteenth Century (2019).