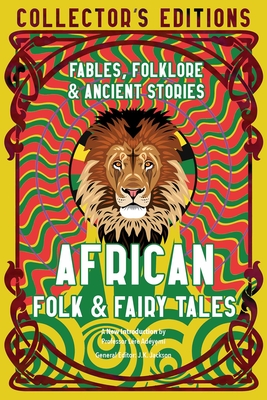 
On Our Shelves Now
Delightful and ingenious stories from throughout the continent of Africa.

A Gorgeous Collector's Edition of folk and fairy tales from the continent of Africa, with stories from regions now marked as modern nations such as Libya, Algeria, Nigeria, Ghana, South Africa, Kenya, Tanzania, Uganda and Rwanda, who inherit the folk and mythic tales of ancient peoples. Here you'll find stories of ogres and tricksters, riddles and poems, and great heroes of history such as Liongo. This new collection is created for the modern reader.

Flame Tree Collector's Editions present the foundations of speculative fiction, authors, myths and tales without which the imaginative literature of the twentieth century would not exist, bringing the best, most influential and most fascinating works into a striking and collectable library. Each book features a new introduction and a Glossary of Terms.
Lérè Adéyẹmí is Professor of Yorùbá Literature and Culture at the University of Ilọrin, Nigeria. He has published articles and textbooks in Yoruba studies and was the Associate Editor of Ilọrin Journal of Linguistics, Literature and Culture. Adéyẹmí is also a published creative writer. His most recent novel is Ten Kings Ten Epochs (2020).