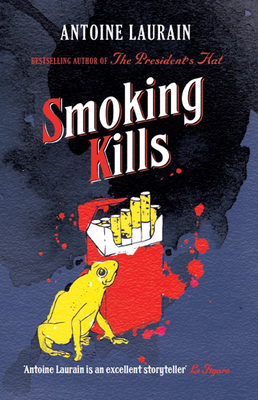 From the author of The Red Notebook, described as 'Parisian perfection' by HRH The Duchess of Cornwall, Smoking Kills is a darkly comic novel told with Laurain's characteristic Parisian charm.

'A brisk black comedy' The Guardian

How far would you go to enjoy a cigarette?

When headhunter Fabrice Valantine faces a smoking ban at work, he decides to undertake a course of hypnotherapy to rid himself of the habit. At first the treatment works, but his stress levels begin to rise when he is passed over for an important promotion and he finds himself lighting up again - but with none of his previous enjoyment. Then he discovers something terrible: he accidentally causes a mans death, and needing a cigarette to calm his nerves, he enjoys it more than any other previous smoke. What if he now needs to kill someone every time he wants to properly appreciate his next Benson and Hedges? An original and totally French black comedy from bestselling author, Antoine Laurain.

Antoine Laurain is the award-winning author of nine novels including The Red Notebook (Indie Next, MIBA bestseller) and The President's Hat (Waterstones Book Club, Indies Introduce). His books have been translated into 25 languages and sold more than 200,000 copies in English. He lives in Paris.Louise Rogers Lalaurie is a writer and translator from French. She is the author of Matisse: The Books and has translated ten novels, numerous short stories and over 30 non-fiction books.