A Forager's Life: Reflections on Mother Nature and My 70+ Years of Digging, Picking, Gathering, Fixing and Feasting on Wild Edible Foods (Paperback) 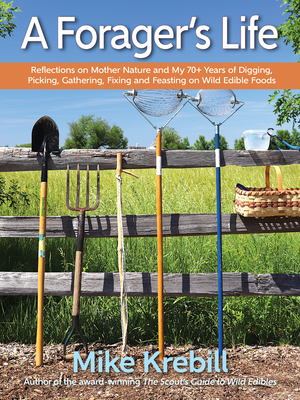 A Forager's Life: Reflections on Mother Nature and My 70+ Years of Digging, Picking, Gathering, Fixing and Feasting on Wild Edible Foods (Paperback)

Take a walk in the woods with Mike Krebill. When Mike tells you a story about his experiences with a wild plant or mushroom, you're getting far more than guidebook data - you're getting a lifetime's worth of keen observing, experimenting and, sometimes, close calls.

Mike is one of America's most acclaimed foragers and wild food educators, a living encyclopedia of all things wild and edible. A Forager's Life is about a life spent in nature and in the classroom - from the thousands of wild edible forays with adults and young people, to the legendary Euell Gibbons and the first Earth Day, to the rise of today's great foraging wave, a wave that is bringing city folks and country folks together in search of that most basic of life's pleasures: wild foods.

It's about waking up to the natural world, with the nurturing help of great mentors along the way. At its heart, it's the story of a natural-born teacher who never stopped being a curious little boy, and who knows how to appeal to the curious kid in all of us. That's what earned him multiple awards during his long career as a middle-school science teacher, environmental educator and naturalist.

Are there recipes? Yes, lots of them, all kid-tested and kid-approved. You might like to try the Queen Anne's Lace pancakes, for starters.
Mike Krebill is an inductee into the National Wild Foods Hall of Fame. Considered by many to be one of the great foragers living today, he is a sought-after speaker at major foraging events across North America - from Oregon to New York, Tennessee to Ontario, Canada, and states in between. An award-winning life science teacher (retired after 35 years), he was one of the architects of a six-year effort to bring environmental education into Michigan's public schools. As a young leader in environmental management initiatives, he was named to Gov. Rockefeller's Central New York Regional Planning & Development Board. Early in his career he was recruited to become Iowa's first Naturalist, and today is an honorary member of the Iowa Association of Naturalists. He has been active in Scouting at every level for 50+ years, and has received multiple awards for outstanding service as a wild plants educator. Mike had been botanical technical editor for 14 books on foraging by well-known authors (including Sam Thayer's Nature's Garden and Leda Meredith's The Forager's Feast). Mike's first book, The Scout's Guide to Wild Edibles (St. Lynn's Press 2016), won the 2017 National Outdoor Book Award (NOBA) for Nature Guidebooks.