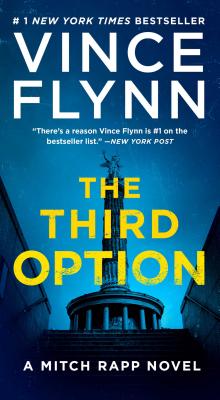 This is book number 4 in the A Mitch Rapp Novel series.

From the #1 New York Times bestselling author of American Assassin—now a major motion picture—comes a pulse-pounding thriller that “is an old school spy story…updated with heavy helpings of international intrigue and domestic politicking and betrayal” (Library Journal) that puts CIA agent Mitch Rapp in the crosshairs of an enemy even he did not anticipate.

When diplomacy fails and military intervention is inappropriate, our leaders sometimes take a third option and Mitch Rapp has been assigned just such an “unofficial” task—targeting a German industrialist who is supplying a notorious terror sponsor.

But when the mission is dangerously compromised, Rapp quickly realizes he’s been deemed an expendable asset in a power struggle on home turf: the battle over who will become the successor of the dying CIA director. But no one counted on Mitch Rapp’s return…or how far he’ll go to find out who set him up.

An explosive and unputdownable thriller that is ripped from the headlines, The Third Option proves that “in the world of black-ops thrillers, Mitch Rapp remains the gold standard” (Booklist, starred review of Red War).
#1 New York Times bestselling author Vince Flynn (1966–2013) created one of contemporary fiction’s most popular heroes: CIA counterterrorist agent Mitch Rapp, featured in thirteen of Flynn’s acclaimed political thrillers. All of his novels are New York Times bestsellers, including his stand-alone debut novel, Term Limits.